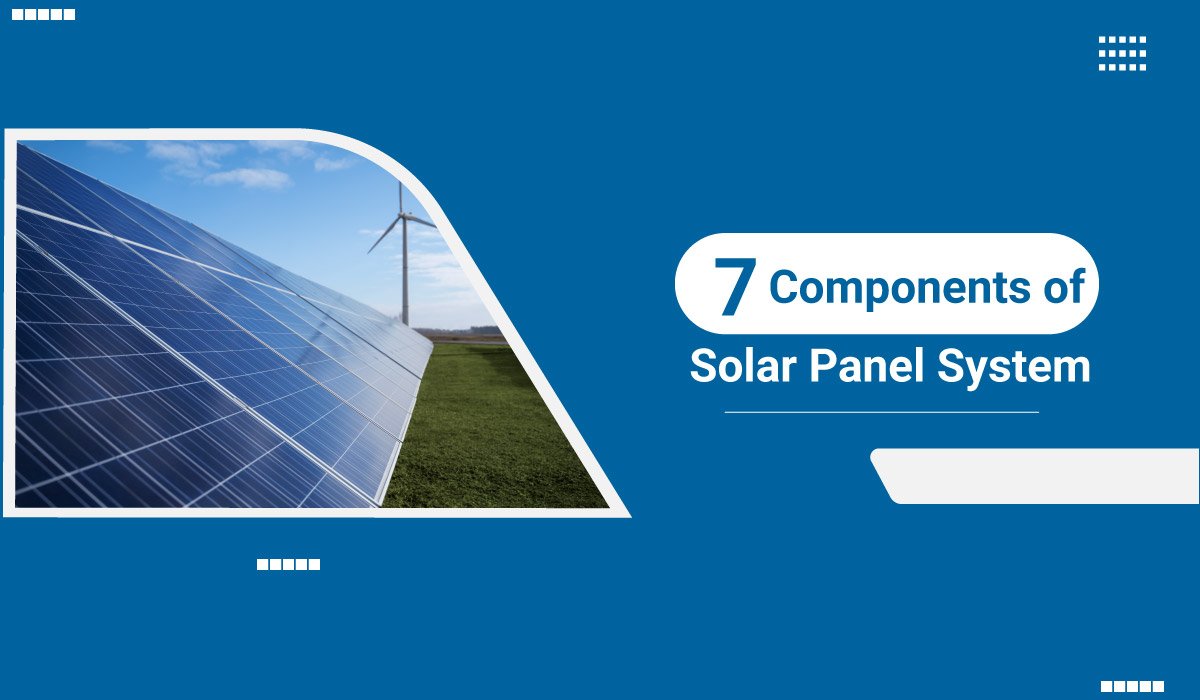 When starting a new DIY solar energy project, a beginner asks many questions: “What parts do I need to complete my solar power project.” The seven components of solar power systems need not be expensive or hard to find. Many DIY solar power installations are built using second-hand parts from the internet as people look to upgrade their PV systems.

But before you start buying or connecting the individual parts on your roof, it helps to get a good quality solar guide that will walk you through the whole process of building, installing, and setting up your home solar energy system. Aside from the obvious requirements of time, tools, and instructions, consider the following seven fundamental components for your solar power system.

There are seven primary components that you will need to establish a grid-tied solar power system for your home. We will organize these so that they will be integrated into your home solar energy system.

How do solar panels work?

The part of a solar power setup that most people are familiar with is the solar panel. Photovoltaic or solar panels are highly visible and essential components of any solar power system.

Although they can also be positioned on the ground, solar panels are typically mounted on the roofs of buildings and automobiles. They can be adjusted at various angles to capture as much sunlight as possible during the day.

A solar panel often lasts several decades, although some other parts will require upkeep and replacement. Solar panels of good quality will easily last 25 years. It is the most expensive and important aspect of your system. Therefore, you don’t want to skimp on it.

The homeowner often assembles photovoltaic solar panels from individual pieces found in their garage or workshop in most home installations and DIY solar power systems. You can, however, purchase low-cost photovoltaic cells online and assemble them into complete 80W, 100W, or 120W Solar Panels.

If you don’t have the time or ability to make your solar panel, there are many commercially available options. Individual panels are then linked together to form larger solar arrays.

Disconnection of the Solar Power System

A solar power system disconnect is essentially just an electrical switch but an essential component. It enables you to disconnect and switch off the DC power output from your solar panels and array in case of a repair or a problem with the solar system. On a bright sunny day, this disconnect switch must be powerful enough to handle the total power output from the panels.

Most home solar systems incorporate a battery backup for when the sun does not shine, such as on cloudy days or at night. The battery charge controller guarantees that the batteries receive a steady amount of electrical power so that they are not overcharged and that the backup batteries do not discharge back through the system at night. This component is like your car battery charger in many aspects, so it will not be too pricey.

Your solar system will require deep-cycle batteries to store the solar electricity generated by your solar panels and keep the lights on throughout the night. Deep cycle batteries are not the same as shallow charge automotive batteries, which have thinner lead plates and are meant for vehicles.

Deep cycle storage batteries for solar systems are more durable and intended to withstand the charging and discharging cycles that they must withstand. Reconditioned deep-cycle batteries are less expensive than new deep-cycle batteries. Even better, you might be able to get old dead batteries used in fork trucks, golf carts, and electric buggies for free and recondition them yourself.

A solar power meter is optional, but it is included here since it provides a simple method to see how much free solar power is given to your home by your solar panels. A system power meter also helps you enhance your system to get the most out of your solar installation while letting your neighbors know how much your solar system is saving.

The solar power inverter uses electronic switching operations to convert the DC solar energy from the photovoltaic panels into usable 115, 220, or 240V AC electrical energy in the home because your solar panels provide DC power. In contrast, your home is powered by mains AC.

In practice, an inverter allows you to run electric drills, computers, vacuum cleaners, mains lamps, and most other mains electrical appliances that can be hooked into the solar panels’ wall sockets. There are many square waves and sine wave modified wave inverters on the market, but a decent quality 1200W sine wave inverter should only cost you a few hundred dollars.

When the sun does not shine and the storage batteries are depleted, some backup power may be necessary. Most systems will contain some form of backup power. In a stand-alone arrangement, this is usually a diesel generator. The utility grid would provide backup power via the inverter in a grid-connected system. A wind turbine or a water wheel as part of a small-scale hydro system can also be a backup power source.

Using solar energy to power your home can be easier whether you build your solar panels from scratch or buy pre-made commercial panels. With a grid-connected system, you may even sell excess electricity back to the utility company that has been selling it to you for years, earning you extra money.

If you’re installing off-grid, a solar kit can be an excellent option if you’re new to solar electricity. Add a battery to complete off-grid solar setups on RVs, trailers, boats, sheds, tiny homes, and cabins. Microcare Group starter kits include all the necessary solar components for charging a battery bank. It is one of the best solar parts manufacturers in the world.

If a kit isn’t for you, look through our selection of solar panel components, which includes high-quality solar panels, charge controllers, inverters, and more. Microcare Group supplies all the components of the solar system you require for an environmentally friendly solar system.